An overview of the architecture

Two types of stores are used in Irmin: the block and the reference store.

This is the type of store used for the commits, nodes and contents. The block store is persistent and content addressable. Persistence means that updating a data structure returns a new one, which shares its sub-parts as much as possible with the original structure, to avoid the cost of extra allocations. A side effect is that a history of updates is maintained as well.

It is also a content addressable store as values (be it contents, commits or nodes) are stored as a pair (hash(value), value) and therefore a value can be accessed using its hash.

A collection of block stores is available in Irmin, but you can create your own using the interface Irmin.Content_addressable.S as long as the following are guaranteed:

It is a mutable store, used for branches. As in Git, branches are tags added to commits. A default branch is always available in Irmin, the main. Branches are useful when multiple processes access the store, to keep track of the state of each process. This type of store is also called an atomic write store: two independent processes can do some local modifications, but updating the same branch is an atomic and concurrent operation.

Branches are stored in the reference store as pairs of (hash(commit), branch).

As for the block store, you can choose a reference store from the ones provided by Irmin, or you can create your own using the interface [Irmin.Atomic_write.S]. The operations you have to implement need to satisfy some constraints:

As we have seen in our examples so far, Irmin uses trees to store its contents: the leaves of the tree contain the contents, while the nodes encode the path in the tree from the root to the contents. Commits are represented as special nodes in the tree. For instance, the contents we commited to a Mem_store in the Getting started section: 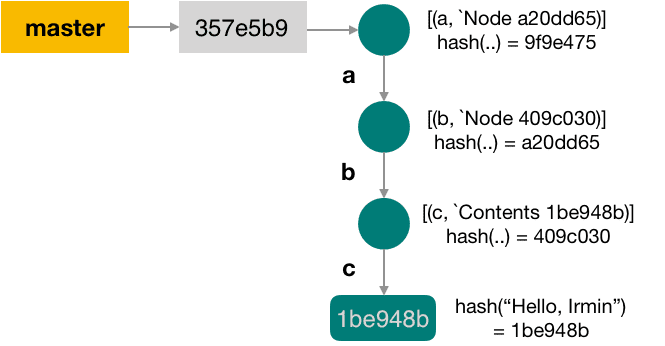 We add a new commit:

and the store changes to 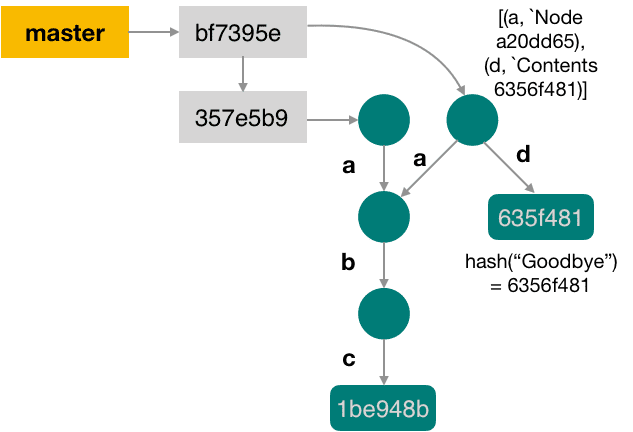 As mentioned, Irmin has a few types of stores available: the in-memory store and the Git store that we have seen in section Getting started, but also some others that you can explore on GitHub. In the next section we will create our own Irmin stores.